People will see the title of this slot and naturally be immediately drawn to Mega Moolah. So, without further or do, we’re pleased to report that Fortunium Gold is a part of the renowned Mega Moolah series. And what we mean by that is that the game is connected to the Mega Moolah progressive jackpots network, so there are four of them up for grabs in this title, with life-changing money winnable.

While the progressive jackpots are a huge draw for players, this is a slot about more than the prizes that have been made available by developers Microgaming. The five-reeled game is supported by a theme that sees players head back to a Victorian-style city, with the slot’s backdrop detailing a street with buildings on either side illuminated by the sun, to finish off what is a visual treat.

Slot gamers who have played the original Fortunium title will kind of know what to expect in some ways here, but it’s great to see Microgaming buck the trend of including progressive jackpots and then everything else, such as the theme, being basic as a result. It makes the game a more attractive proposition, with players more likely to spin the reels, which they can do from 10c, with a maximum stake of €15.

18+. New players only. Minimum deposit of £10. Bonus funds are 121% up to £300 and separate to Cash funds. 35x bonus wagering requirements. £5 max bet with bonus. Bonus must be used within 30 days otherwise any unused bonus shall be removed. BeGambleAware.org Full T&C's Apply

The jackpot feature is, of course, what most, if not all, players are going to want to play when they check out Fortunium Gold: Mega Moolah by Microgaming. But it’s important that the slot has other features, as well as the jackpot bonus round, to keep players interested.

Microgaming duly oblige and provide some ? icons on the reels. The ? icons are mystery symbols, and they can appear during any spin, and when they do, they will appear stacked. The ? icons can appear in two colours; green represents low and high-value symbols, while gold represents high-value icons and wilds. When ? symbols appear, other ? icons transform into the same as each other. 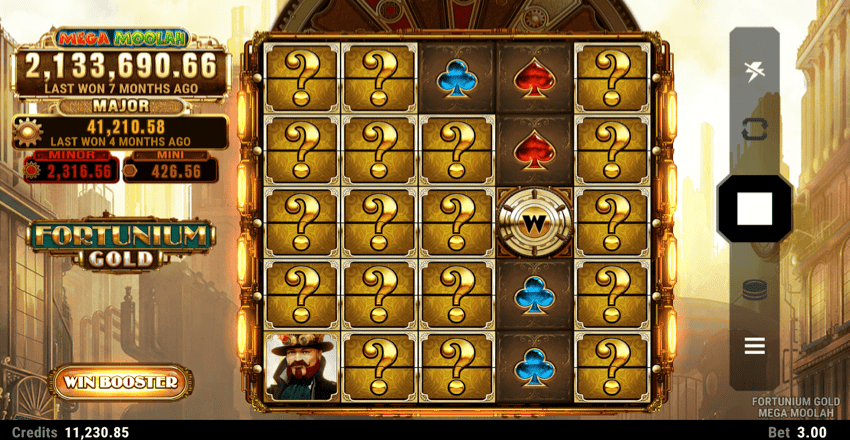 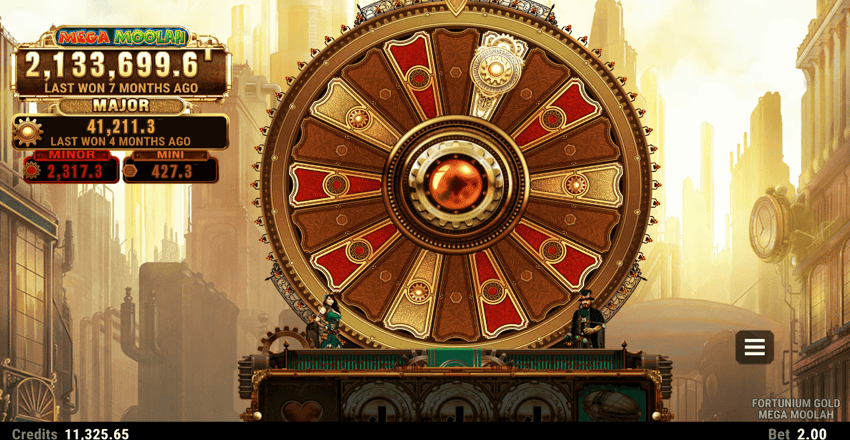 Tying into the mystery symbols offering is the win booster system, with players given the chance to increase their stake by 50%. By doing this, they will activate the win booster mechanic, which sees mystery value symbols only ever turn into high-value icons or wilds. The option to trigger the win booster is in the bottom left corner of the screen, and it will work in the base game and the free spins feature.

Now, the feature everyone has been waiting for. To win one of the four progressive jackpots, players need to see a ? icon turn into a jackpot wild because this will move them over to the screen where they will spin for one of the game’s big prizes. Whichever jackpot the wheel stops on is what will be won, with life-changing money up for grabs.

I am a knowledgeable and accomplished writer specialising in the iGaming and gambling fields. Leveraging my many years of extensive casino, slots and sports betting knowledge to deliver high-quality content, which I carry through to my audience keeping them updated with the latest industry trends, technology and games. My aim is to deliver honest and true content to the benefit of the reader.

The top prize in the base game is 800x the bet.
The progressive jackpots reset at Mini €10, Minor £€100, Major €10,000 and Mega €1,000,000.
You need three or more scatters in view simultaneously to trigger the free spins bonus round.
Jackpot wild icons via mystery symbols will trigger the jackpot feature.